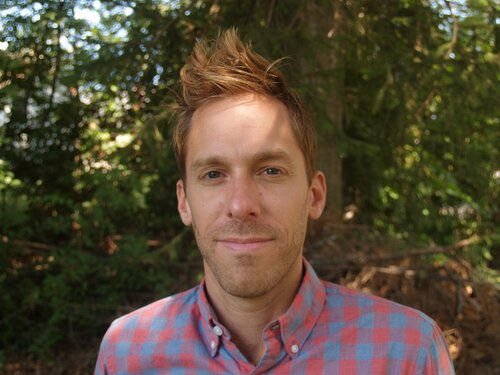 Christopher Kempf is the author of the poetry collections What Though the Field Be Lost (LSU, 2021) and Late in the Empire of Men (Four Way, 2017).  His scholarly book, Writing Craft: The Workshop in American Culture, is forthcoming from Johns Hopkins University Press.

My poetry and creative nonfiction examine the role of aesthetics in the curation of national identity.  My first book, Late in the Empire of Men, tracks my coming-of-age in Ohio and California against the westward trajectory of U.S. history, a trajectory I situate within a larger context of racial and ecological imperialism.  My second book, What Though the Field Be Lost, interrogates the rhetorical construction of the past at sites of public remembrance.  Organized around my time living in Gettysburg, Pennsylvania, the collection uses the battlefield there to engage ongoing issues involving race, regional identity, and the ethics of memory, tracing how post-bellum memorial practices (like monument construction) advance hegemonic notions of whiteness.  In similar fashion, my essay collection-in-progress, Local Color, analyzes local rites, mythologies, traditions, and economies which serve as sources of mutual sustainability even as they advance distinct orders of violence.  While the book explores “the local” as a corrective to nationalism and as an alternative to the placelessness of global capital, it also excavates cultural forms (such as high-school football) which refract and reproduce larger, often pernicious ideologies of nation, race, and class.

My scholarly research focuses on the interrelation between work and writing.  I am interested, in particular, in how and why manual labor is invoked as a metaphor for literary production across the late nineteenth and twentieth centuries.  This figuration has ancient origins, of course, but it finds immediate expression, during this period, in the creative writing “workshop.”  Where does this term originate, I ask, and to what ends?  How do techniques such as structure, texture, and tone come to be thought of as creative writing “craft,” as strict, technical construction in the brick and mortar of language?  For there is nothing inherent in creative writing that precludes one from practicing it in a “salon” or “studio” or “seminar.”  There is nothing in the discipline that necessitates a craft-based approach over one based on affective response or literary history or even poetic theory.  With the rise of the workshop system in American culture, however, work and writing were welded together like steel plates—my research inspects that weld.  My book, Writing Craft: The Workshop in American Culture (Johns Hopkins, 2022), argues that, despite growing interest in creative writing studies, the discipline’s central practice and primary institutional form, the workshop, has remained invisible before our scholarly eyes.  Taking seriously the cultural resonances of that term, including its correlation of literary and material production, my work revitalizes the dead metaphor at the heart of creative writing—what is at stake, I ask, in the figuration of writing as craft labor?  On whose behalf does the poet punch in?

National Endowment for the Arts Fellowship, 2015