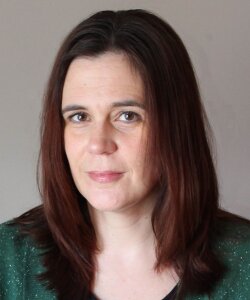 Jodee Stanley is the editor of Ninth Letter, the award-winning literary/arts journal published by UIUC's MFA in Creative Writing Program in the Department of English. She has been awarded an Academic Professional Award from the College of Liberal Arts and Sciences at UIUC and a Faculty Fellowship from the University of Illinois Academy for Entrepreneurial Leadership.

Her writing has appeared in journals and anthologies including Blood and Beetles (Suicide House, 2020), Malefaction Magazine, Coffin Bell Journal, Doubletake Review, Queen Mob's Teahouse, Crab Orchard Review, Hobart, 580 Split, Cincinnati Review, and elsewhere. Her essay on literary publishing, which originally appeared in the Mississippi Review, was reprinted in the anthology Paper Dreams: Writers and Editors on the American Literary Magazine (Atticus Books, 2013), and her fiction has received special mention in the Pushcart Prize and Year's Best Fantasy and Horror anthologies and named to the Wigleaf Top 50 Very Short Stories.